Car makers don’t often collaborate on projects, especially when they’re direct competitors. However, looming government fuel economy and emissions mandates can make strange bedfellows. And so, the Ford 10R80 10-speed automatic transmission was born. It was co-developed with General Motors, although Ford apparently took the engineering lead on the design. The mission was to create a 10 speed transmission that could improve both the fuel efficiency and performance of high-horsepower engines. The resulting Ford 10R80 transmission was advanced enough to handle the power of the Ford Mustang GT 5.0 and Ford F150 Raptor, while improving the efficiency of the Ford Expedition and Lincoln Navigator.

Like it or not, a CVT transmission is one of the most efficient gearboxes ever invented. Because there are no actual gears, optimal engine speed can be continuously maintained depending on the load. This allows for seamless acceleration under hard throttle, and lower fuel consumption when you’re just cruising. On a traditional geared transmission, a certain amount of energy gets lost every time a gear ratio is changed. This penalizes both fuel economy and performance, because the engine has to climb back to the RPMs it was just at. The Ford 10R80 10-speed transmission is designed to combine the efficiency benefits of a CVT, with the stepped feel of a traditional automatic transmission.

To create this optimal blend of performance and efficiency, the 10R80 transmission has a wide 7.39 gear ratio spread and a low 4.70 first gear for maximum performance off-the-line. Even though this Ford 10-speed automatic transmission has such a wide gear ratio, it has extremely small steps between the gears. This means the engine RPM only drops (approximately) 20% with each shift, which keeps the engine in the ideal RPM range to achieve either peak performance or efficiency (much like a CVT transmission). The Ford 10R80 also has three overdrive gears, which it can downshift from very quickly.

As shown above this, transmission offers a beautiful shift recovery in every gear, which lends itself the perfect unit for narrow power bands. This allows the use of much larger camshafts in a naturally aspirated application. If you are looking into going to a forced induction setup, this shift recovery allows for larger turbo and AR housing for max performance.

This 10R80 transmission has a newly designed filter has two types of media: fine and course. The course medium is common in most filters (orange filter paper), while the fine filtration (White paper) is the newer material. There is a thermal plate inside the filter that separates the course and fine media. When the oil is colder (higher viscosity) at startup, the fluid will flow through both the fine and course filter media.

As the fluid heats up (less viscosity), the thermal plate will bend and restrict the coarse section; directing most of the fluid through the fine medium, and therefore, catching more of the finer debris once the fluid is heated, giving it a far superior filtration system.

The 10R80 transmission, while a very capable unit, has its deficiencies just like anything else when it is asked to perform outside its original design intention. Since it's debut in 2018, Suncoast has been actively involved in research and development of this new platform. With our active partnership with Raybestos powertrain, we can now deliver you the very best product to date with the 10R80 platform. These new Suncoast 10R80 transmission expanded capacity clutch modules that are included in each of our Category 2 10R80 transmissions.

It is not uncommon to see rapid degradation along with premature failure with this clutch pack in even stock form.

The "D" clutch is engaged in P, R,1,2,3,4,6,7,8,10. Where the problem lies is in its oncoming clutch responsibilities when engaged in 6th gear as the oncoming clutch. With this responsibility in higher horsepower or more demanding driving situations it becomes very obvious uptown teardown this clutch has seen its share of abuse.

Suncoast provides an additional capacity clutch module for this clutch pack, increasing clutch count by 17 percent by going from the factory 6 clutch count to a 7 clutch count in this drum. This expanded capacity is also coupled with the GPZ friction material, providing not only additional surface area but higher friction coefficients, as well.

If the 10R80 transmission had evil twin redheaded stepchildren, the "E" clutch would definitely be one of them. This other proverbial thorn in your side would be the "F" clutch.

This clutch, the "E" clutch in a 10R80 transmission, is engaged in 1,3,5,6,7,8, and 9th. The real issue becomes apparent pretty quick. This clutch is cycled on 3 times and off 2 times by the time you are in 5th gear. The clutch is on in 1st then cycled off in 2nd, cycled back on in 3rd, then back off in 4th...only to be cycled back on in 5th gear. In higher-horsepower or higher-demand towing and hauling situations, this constant cycling on and off can lead to premature failure.

Suncoast has addressed this issue with the 10R80 transmission by improving the clutch friction properties with the New Raybestos GPZ material and increasing clutch capacity by a whopping 20%. This takes the clutch stack-up from a factory 5-clutch stack up to a 6-clutch stack-up. We simultaneously are addressing the heat issue with both improved friction coefficient, as well as increasing surface area. This Suncoast 10R80 transmission "E" high capacity comes completely assembled and stacked up with a new (not used) OE machined drum, piston and backing plate.

This clutch is also prone to premature wear as we have seen with other Lepelletier Ravigneaux Gear sets...oncoming clutches in higher gears seems to take the blunt of the beating. With the new 10R80 transmission, the "F" clutch is no exception.

The "F" clutch is engaged in R,4,5,6,7,8 and 9th. The quickest path to early or premature degradation to this clutch pack is wide open throttle or heavy-load-indexed 3rd to 4th shifts. This is especially prominent in applications where torque management has been deleted.

Suncoast has corrected this issue by adding 25% more capacity to this clutch pack by taking it from 4 clutches to 5 in this particular clutch pack.

The SunCoast 10R80 Pro-Loc Valve Body begins as a new OE Ford valve body. We then proceed to address a few of the critical circuits we have experienced premature failure on.

This new SunCoast 10R80 Valve Body corrects issues with the lock-up circuit. This problem can be magnified in situations where there is higher driver demands, such as heavy towing or aftermarket converters with higher turbine slip, ultimately leading to accelerated torque converter clutch degradation. The SunCoast 10R80 Valve Body corrects this circuit, delivering cleaner and quicker converter apply. This prevents not only excessive heat, but also prevents premature clutch failure.

With the Ford 10R80 Transmission, we have witnessed inconsistent pressures and cavitation at higher RPM. This can be witnessed in critical high RPM shifting above 8,000 RPM. The new SunCoast Pro-Loc High Output 10R80 Transmission Pump will increase line pressure by approximately 60psi across the entire line pressure curve without any additional tuning. With factory tuning, line pressure will go from 65psi at idle to 135psi and at wide open as much as 350psi. We also eliminate the self-regulating feature, keeping consistent and reliable line pressure across the entire RPM range. This new pump comes in every new SunCoast 10R80 transmission.

- NEW SOLENOID STRATEGIES MUST BE REPROGRAMMED UPON REPLACEMENT OF THIS NEW VALVE BODY THROUGH FORD IDS OR FORSCAN.

- This Transmission comes without a new torque converter; at power levels above factory 500 horsepower, the factory converter clutch is not recommended due to its inability to successfully hold the additional torque. 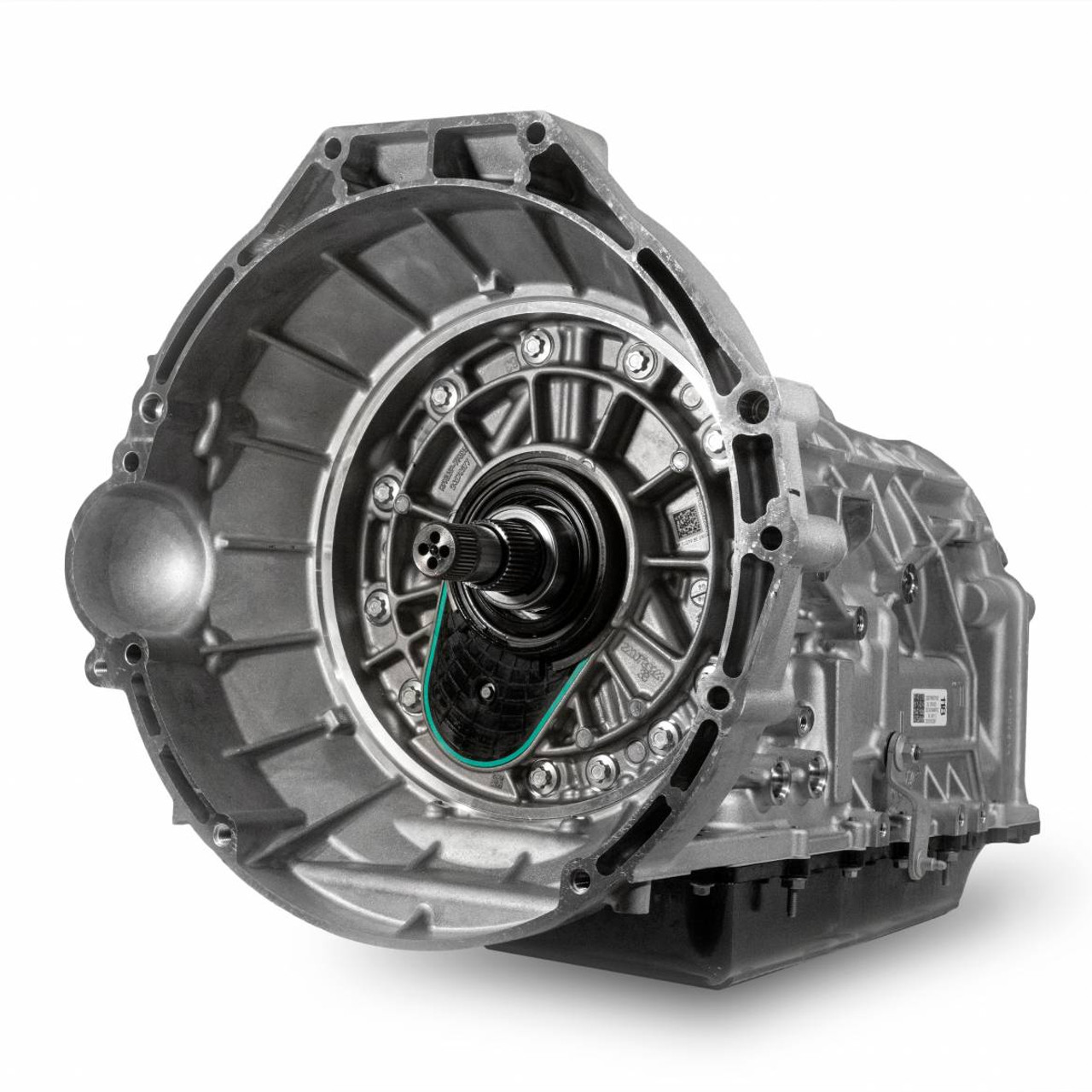